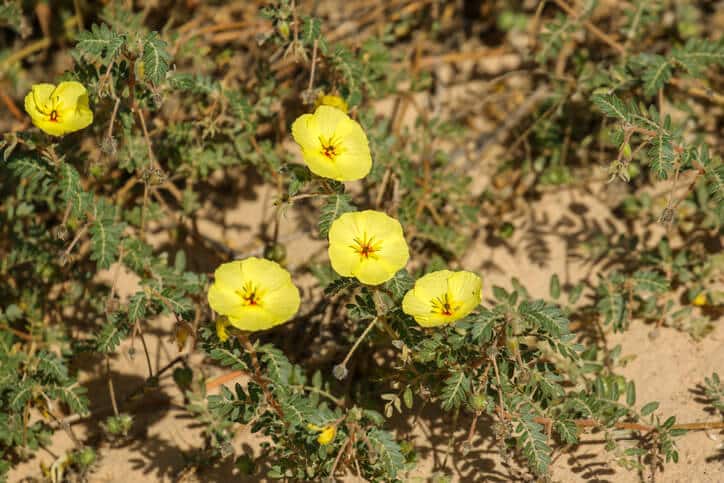 Tribulus Terrestris powder is a plant-based dietary supplement used for thousands of years. It offers a number of positive health and wellness benefits, and it’s well-known for its ability to reduce blood sugar and cholesterol, improve libido and sexual health, and alter hormone levels. The fruit, leaves, and roots are most commonly utilized in natural medicine and have been used for thousands of years in Traditional Chinese Medicine and Indian Ayurvedic Medicine.

The Tribulus Terrestris plant is a small, leafy annual herb called puncture vine, caltrop, or goat’s head found throughout Europe, Asia, Africa, and the Middle East. It grows flat along the ground from a simple, woody taproot and produces fruit covered with sharp, rigid spines. It’s called “puncture vine” because the spines are sharp enough to pierce bicycle tires and shoe soles.

Other names for Tribulus Terrestris include Gokshur in Sanskrit, Gokharu in Hindi, and Bethagokharu or Nanagokharu in Gujarathi.

The benefits of Tribulus Terrestris

Although Tribulus Terrestris is most commonly associated with sexual health and function, it has also been studied for several other effects, including diabetes.

In a study of 98 women with Type 2 diabetes, 1,000 mg of Tribulus Terrestris per day was prescribed. The results showed that, after three months, the women taking the supplement had lower sugar and cholesterol levels than those taking a placebo. A supporting study done on animals shows Tribulus Terrestris was able to reduce blood sugar levels, protect against damage to blood vessels, and prevent blood cholesterol from increasing.

The supplement has been found to boost libido without impacting testosterone levels. One study found that men with low libido, when given between 750 and 1,500mg of Tribulus Terrestris (daily for two months), experienced an increase in sexual desire of 79%. The results in women were similar, showing an increase of 67% in libido after consuming between 500 and 1,500 mg for three months.

Further research is needed to support the supplement’s efficacy for treating erectile dysfunction, with some reports showing significant improvements in erections and sexual satisfaction.

Tribulus Terrestris is most commonly used as a dietary supplement to increase testosterone levels, enhance sex drive, and improve sexual performance. In more recent times, it has been used by athletes to enhance muscle mass and increase strength and sexual health in both men and women.

According to a study in Bulgaria, the plant encourages androgen (in particular testosterone) production and reception. It must be noted that there is limited scientific evidence that Tribulus Terrestris impacts testosterone levels. Many believe that the active compounds in the plant increase testosterone levels, which are linked to sexual and athletic performance.

Although more research is required to prove the supplement’s ability to improve body composition, many people who are active and exercise frequently take Tribulus Terrestris to increase muscle density and decrease fat.

Tribulus Terrestris may have anti-inflammatory properties and, in high doses, offers some pain relief.

A study on rats showed an increase in immune system activity after taking the supplement, and test-tube research shows possible anti-cancer effects.

The plant acts as a diuretic, increasing urine production due to the large quantities of nitrates and essential oil in the fruit and seeds of the plant. This is supported by the presence of potassium salts. The supplement is, therefore, useful as an anti-hypertensive agent, helping to lower blood pressure and the associated complications of strokes and heart attacks.

Research suggests that oral consumption of Tribulus can assist with treating certain types of eczema in adults and children, reducing redness and skin outbreaks.

Early research suggests that Tribulus taken in combination with other herbs can help to improve symptoms associated with an enlarged prostate in men.

It is most commonly used for male sexual health and to support muscle mass gain as part of pre-and post-workout supplementation. Studies also show promising results, looking at Tribulus Terrestris’s ability to reduce blood sugar, promote heart health, and for its immunity and anti-cancer activity. For females with PCOS or symptoms of menopause, the plant is also able to offer relief.

Tribulus can help to improve menstrual cycle regularity, decrease body weight, and improve quality of life for women with Polycystic Ovary Syndrome. For women with PCOS, the herb eliminates excess water and reduces the size of existing cysts.

When taken in conjunction with other natural herbs, Tribulus has been shown to have antidepressant effects in studies on mice.

How to take puncture vine supplements

All parts of the Tribulus Terrestris can be safely consumed. However, most preparations use the roots or seeds of the plant. These can be dried and made into a powder, then taken in capsule form, or dried and used as a tea.

Often the active ingredients of the plant are extracted and made into an extract or a tincture for internal use. If you are looking for an off-the-shelf product, Tribulus Terrestris is available as a tea and in capsule form or as a tincture. It can also be purchased in cream or gel form for external application.

When to take Tribulus Terrestris

Although the herb can be consumed continuously, some may want to know what is the best time to take Tribulus. It is often consumed in cycles, especially if used for its ability to improve body composition. Here, active individuals will take Tribulus supplements during their active workout phase when they need to build muscle mass. During the rest phase, they will avoid taking Tribulus Terrestris. The cyclical nature of consumption is thought to have the most beneficial results.

In most cases, the dosage will be determined by body weight, somewhere between 4,5 and 9 mg per pound. It is likely to vary widely depending on the condition that is being treated.

The research shows a wide variety of dosages have been used to assess the effectiveness of the supplement as a treatment. If you want to lower your blood sugar naturally, a dosage of 1,000 is effective. But if you are using the supplement to increase your libido, a dose of 1,500 per day is recommended.

If you are using Tribulus Terrestris as a bodybuilding supplement, it can be taken alone or combined with other supplements, and preferences for when to take the plant vary widely. Some prefer it as a pre-workout supplement, finding that it helps them to get the most from a workout session, while others prefer to use it as a post-workout recovery supplement.

As a pre-workout supplement, it can be taken together with Creatine, for example, in a juice between 30 and 60 minutes before a workout. The combination of natural performance enhancers offers the individual the energy and stamina they need to work hard and consistently and get the best results.

If taken as part of a post-workout supplement, it is often combined with Ashwagandha (Withania somnifera) in a fruit juice. The combination helps to improve the level of testosterone as well as decrease the level of the stress hormone cortisol in the body. The herbs work together to promote catabolic action, effectively reducing recovery time.

There are minimal side effects of using Tribulus Terrestris, with several studies showing no safety concerns. In some cases, users have reported minor stomach cramps and reflux. In addition, because Tribulus Terrestris is entirely natural, it can safely be used by sports and other professionals as it does not appear in blood tests.

Use in traditional Chinese medicine

Use in Indian ayurvedic medicine

Ayurvedic texts dating back thousands of years mention the use of Tribulus in Indian medicine. It has been used to treat sexual dysfunction, impotence, and venereal diseases. The dried fruit of Tribulus Terrestris is used to treat genitourinary tract disorders effectively and to remove urinary stones. According to the Ayurvedic Pharmacopoeia of India, the plant’s root and fruit also have cardiotonic properties, helping to improve heart health.

A phytochemical study of the plant shows that Tribulus Terrestris contains saponins, flavonoids, glycosides, tannins, and alkaloids. The level and composition of the saponins change depending on which geographical region the plant is sourced from. The saponins in the plant are believed to be responsible for its many health benefits.

Referred to as Gokshura, Ayurveda promotes the use of Tribulus Terrestris, an effective, adaptogenic herb that helps to build body condition, improve muscle mass, and assists in boosting fitness. The effectiveness of Gokshura is based on the abundance of saponins, phytochemicals that boost testosterone, the most prominent of which is Protodioscin, an active ingredient that helps in bodybuilding.

Protodioscin promotes the release of nitric oxide, which helps to increase the flow of blood that is rich in oxygen to the muscles that need it. Muscles then use the protein to build muscle mass. In addition, Protodioscin works to stimulate the pituitary gland to encourage testosterone production, and testosterone is a key hormone for effective muscle building.