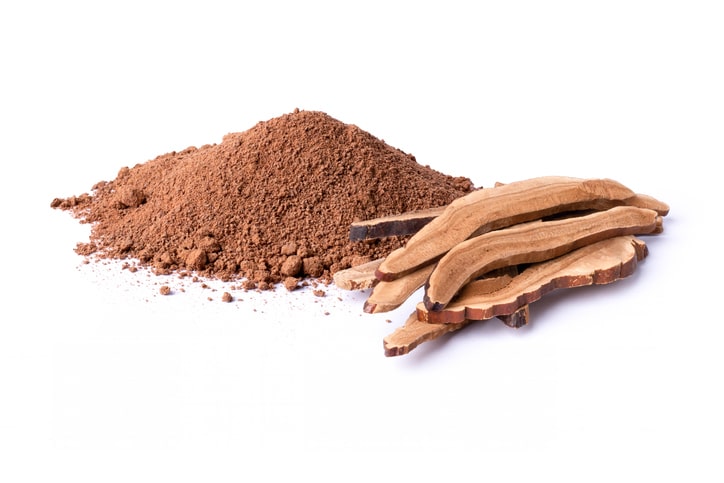 Reishi mushrooms have been used as medicine for centuries. The red reishi mushroom is also known as the Ling Zhi mushroom. The fungi grow on the sides of trees. And in the wild, the red Reishi grows at the base of hemlock or maple trees.

These reishi mushrooms are basically a group of species in the Ganoderma genus. Two of the most common species are:

While different Ganoderma genus species can be found worldwide, most of them are used in traditional Chinese medicine. The red reishi mushroom is quite bitter and isn’t used for cooking. Instead, it’s strictly a medicinal mushroom.

Let’s look at this powerful medicinal mushroom’s history and possible health benefits. Then, we’ll explain the traditional use of red Reishi with some final thoughts.

Chinese royalty highly regarded Reishi mushrooms for their ability to prolong life. Over the years, it became immortalized throughout Chinese culture in statues, silk tapestries, paintings, and on the robes of emperors. It was also revered in Japanese culture, where it’s considered the most potent of all Japanese medicinal polypores. Traditionally, Japanese and Chinese herbalists referred to six different colors of Reishi: red, green, black, white, purple, and yellow.

Reishi has commonly been referred to as the 10-thousand-year mushroom. Other popular names include the mushroom of immortality, the spirit plant, and the mushroom of spiritual potency. It was listed among the 120 superior tonics in the most popular of all Chinese medical texts, the Shen Nung Ben Cap Jing. Exceptional herbs were known to be the most highly regarded of all medicines. This is because they were considered to prevent aging, prolong life, make the body light and limber, boost IQ, etc.

The cultivation of 38 different types of Reishi was recorded on a stone tablet in the year 1124. Interestingly, reishi mushrooms were not often added in many common material medicas throughout history. This could either be due to its rarity or perhaps because it was being reserved only for royalty use.

Modern Chinese physicians have been employing reishi mushrooms to support immune resistance in patients that undergo conventional chemotherapy and radiation treatment for different forms of cancer. Additionally, it positively affects mental well-being and is used as an antihepatotoxin, hypoglycemic agent, and cholesterol-lowering.

With that said, let’s check out the health benefits of this medicinal mushroom.

As mentioned above in the article, one of the main reasons for using reishi mushrooms in the past was their ability to fight disease and weakness. Colds and flu can be treated with a brew made from the tough mushroom. According to today’s research, with the help of this mushroom, any unwanted disease or infection can be handled better owing to its antioxidant properties.

A 2016 review of the red reishi mushroom shows that it could be promising for preventing cancer and fighting it in cancer patients. It also helps support current cancer treatment.

In a recent study, reishi extract was proven to protect against oxidative stress, even in severe cases.

Reishi mushrooms can stimulate an extremely healthy and natural process in the body called autophagy, which jump-starts the human body’s self-cleaning process. This can protect cellular integrity, eliminate dead and harmful cells that cause chronic inflammation, and support mitochondria.

It all comes down to Reishi’s antioxidant and free radical-protective abilities. This can put a stop to aging, tissue degeneration, and weakness.

Studies have proven that red Reishi has specific anti-inflammatory actions, which can protect neurons and nerves from inflammation. Thus, preventing it from causing memory problems, especially in the elderly.

Another study showed that red reishi mushrooms could help reduce the cognitive decline in Alzheimer’s and neurological disorders with similar symptoms and problems.

Studies have proven that the traditional medicinal fungus could help lower blood pressure naturally. Long-term use of the mushroom as a supplement could help you stay in great shape.

Reishi also contains liver-protective or heparo-protective benefits. Such benefits could be powerful enough to fight fatty liver diseases. Since Reishi is considered a detoxifying herb, it can also help protect the kidneys naturally.

Reishi may work as a prebiotic for the gut, which could help feed and sustain beneficial gut bacteria. Reishi can help boost metabolism, control weight, and reduce the danger of obesity by improving gut health. The supplementation of red Reishi has powerful antioxidant benefits, which can also significantly enhance athletic performance.

The disorder affects the nerves, making people feel pain despite there being none. Reishi could someday become one of the most effective botanical solutions for fibromyalgia. 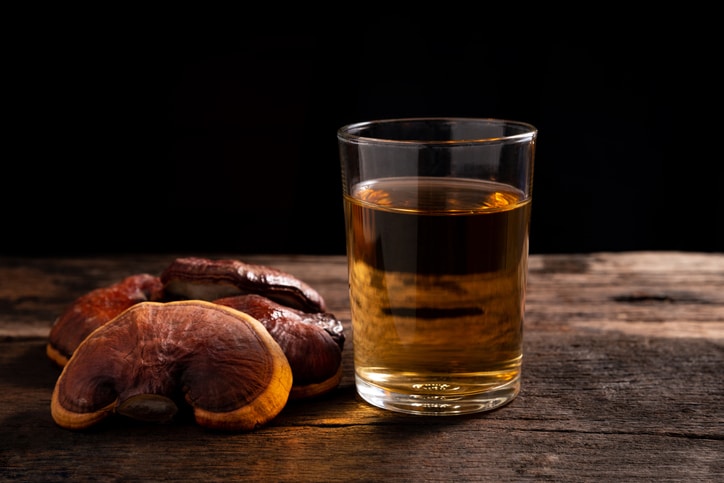 The Traditional Use of Reishi

Now that you’re all caught up with the numerous health benefits of reishi, it’s time to start supplementing with the mushroom!

How To Take Reishi

Note: The tea might taste bitter. Add some fruit juice or honey to make it taste better. Reishi can also be used as a soup base or to make coffee and rice.

Reishi mushroom is very safe to take as a supplement. There are no known side effects of it. However, like most herbal medications, it’s wise to avoid taking them before having surgery.

Nature provides us with a fantastic diversity of health-enhancing goods that aren’t found anywhere else, and all these benefits are stored in just one mushroom. The red reishi mushroom is truly a miracle of nature.