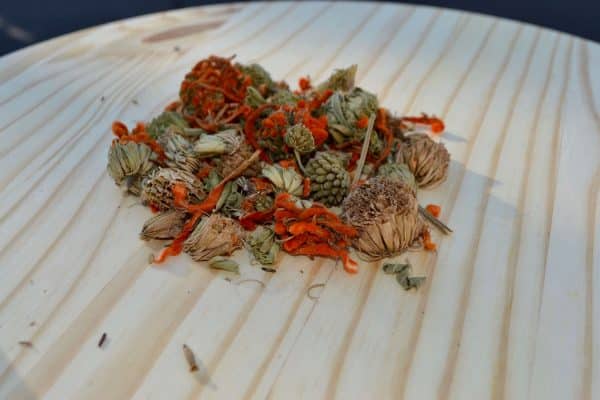 Wild Dagga, also sometimes called Lions Tail, is so named because of the medicinal and psychoactive benefits that it offers, which are similar to cannabis (although milder). With its characteristic bright orange flowers and lemon-smell, this plant has been used for hundreds of years in Africa and China. And the good news is that, unlike marijuana, it is entirely legal in the US.

Wild Dagga is native to Southern Africa and is used in traditional medicine for treating a number of ailments, and several studies have revealed promising results for its use in treating specific health concerns. The herb is a member of the mint family named from the Greek ‘Leon’ which means lion. It’s a popular plant for gardens as it is known to attract wildlife to the garden. This is because the flowers produce nectar that is attractive to birds (primarily sunbirds), butterflies, and bees. It is also hardy and fast-growing, resistant to frost, and does not require a lot of water.

It is found in the wild in South Africa, primarily in the Western Cape, Eastern Cape, Gauteng, Mpumalanga, and throughout Natal, where is it a popular home remedy used to treat headaches, coughs, fevers and more. It is also used by traditional healers to keep snakes at bay and as a remedy for snake bites.

There are a number of different plants that are referred to as wild Dagga that all belong to the Leonurus strain of plants belonging to the mint family. The name came about as a result of the Leonurus plant being used as an alternative to marijuana (or Dagga as it is known in South Africa). Strains of Leonurus have been used throughout the world for their medicinal benefits. The most common and widely distributed strain is Leonotis leonurus (Lion’s Tail). It’s noted for its pungent lemon smell, perennial orange flowers.

The History of Wild Dagga

The herb was introduced to Africa in the mid-12thcentury, and by the mid-13thcentury, it was smoked in pottery pipes throughout Ethiopia, spreading west and south to other countries. In the seventeenth century, use had spread to eastern and western coasts of Africa, where the plant thrived in the fertile, warm climates of Mozambique, Swaziland, and throughout the eastern side of South Africa.

In 1652 the Dutch East India Company led by Jan Van Riebeek arrived in South Africa, where they were first exposed to the use of the herb, which was now a well-established part of the native culture. The Dutch settlers introduced the concept of smoking the plant, which was different from the traditional preparations of consumption where the plant was prepared as a tea or eaten.

In 1668 Jan Van Riebeek sent a contingent of settlers to bring back wild Dagga to be used by the Hottentots and later, in the mid-1800s, as Dutch settlers began migrating up from the Cape in South Africa, they took the herb with them.

The herb is currently enjoying a renaissance in the US, which started in the 1970’s thanks to a growing alternative healing a wellness focus and as a substitute for marijuana. Today it is completely legal throughout the US.

Written records of wild Dagga’s use date back to the twelfth century when the herb was introduced to Africa by Arab traders. Since then, in Africa and the East, wild Dagga has been used to treat a number of different conditions.

In the past, native tribes in South Africa gathered the wild Dagga, which was then dried and used as a decoction both topically and orally. The herb’s dried flowers were smoked to induce a state of relaxation as well as to relieve symptoms of epilepsy. There are a number of different ways to prepare the smokeable herb using leaves, flowers, and resin, which was also sometimes combined with other herbs.

When prepared as a tea, other uses include healing from snakebites and spider bites, as well as reducing pain and fever related to flu, headaches, and menstruation.

Topical treatment is was used to treat conditions such as hemorrhoids, eczema, and itching.

In the East, medical applications of wild Dagga included inducing euphoria, improving circulation, getting rid of parasites from the body, and as a laxative. It is also used for congestion, coughs and as a relief for the pain.

For Anxiety and Relaxation

Wild Dagga has a number of different uses, one of which is to help regulate and calm your heart rate, a symptom associated with anxiety. The primary active alkaloid in the herb is leonurine, which has mild psychoactive properties that help to calm the user and can either be smoked or taken as a tea. It is commonly referred to as ‘wild cannabis’ as it has similar, although milder, effects as those experienced when using cannabis. In general, the calming, relaxing sensation is most notable when consuming the flowers as a tea.

Similar to its namesake, smoking the flowers may induce euphoria and heightened senses, but it is not as potent an experience as to smoking marijuana.

In the US, it has become a popular alternative to marijuana due to the legal restrictions on marijuana usage. As such, Leonotis Leonurus, with similar effects to the psychoactive compound THC found in marijuana, has become known informally as wild Dagga.

For Female Health and Pain Relief

The herb is believed to benefit health in women, treating symptoms at various life stages that only affect women such as menstrual pain, symptoms of menopause, and to support reproductive health. In such cases, the dried herb may be prepared as a tea or added to a back to relieve muscle pain and cramping.

This is supported by a 2005 study that looked at the effect of the herb in mice and rats. Juice extracted from the leaves of the plant was found to have many positive health effects, including the reduction of pain in muscles and the supporting tissues.

It has been shown to have different biological effects, including acting as an anticoagulant to help prevent blood clots, which can lead to heart attacks and strokes. It also works as an antioxidant to protect your body from damage caused by free radicals as well as helping to protect the heart against ischemic heart disease. This is due to the main active compound marrubiin that is found in the herb. The compound has cardioprotective and antioxidant properties and is linked to significant improvements in myocardial function.

Other applications include hemorrhoids, dysentery, and jaundice. And for skin health, the roots are prepared into a mixture to treat stings and bites, as well as promoting healing of boils, and other skin conditions.

How to Use Wild Dagga, Dosage, and Instructions

Wild dagga flowers can be smoked for euphoria, including mood enhancement, increasing color perception, inducing giddiness, and improving mental acuity. If a large number of concentrated flowers from the herb are smoked, the user may experience mild hallucinations. The leaves may have a similar effect but need to be smoked in higher quantities to have the same result.

The flowers and leaves can also be brewed to make a relaxing, calming tea to relieve anxiety or to prepare the user for sleep. It is preferable to use only the flowers in preparing tea as the leaves may be bitter. People who have been using wild Dagga for many years may also choose to infuse the roots and stems into a tea, especially those that do not wish to discard the trim.

Both the calming and the euphoric properties of the herb (depending on preparation) make it a popular, completely legal alternative to marijuana. And it’s used in traditional healing for hundreds of years, dating back further than the twelfth century is a testimony to its many varied healing and recreational uses.

For people seeking a mild, natural high, wild dagga flowers are considered the ideal solution. The flowers can be smoked alone for a euphoric effect or combined with other herbs to curate a personalized euphoric experience as they act as a fully natural catalyst to activate and enhance the other ingredients included in a herbal blend.