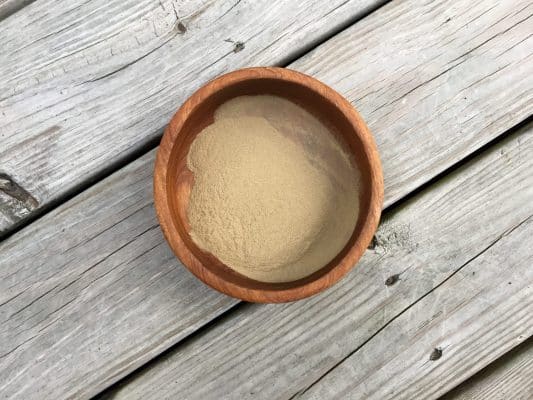 Bacopa (Bacopa monnieri), aka Brahmi, is native to India and Sri Lanka. It’s known as a nervine, mild anticonvulsive, antispasmodic, and antioxidant. Indians used Bacopa monnieri in religious consecration ceremonies for infants because the herb was believed to open a gateway to “intelligence for the child.”

Bacopa (Bacopa monnieri) is the Hindu name given to the universal consciousness, and Bacopa monnieri is the divinity responsible for all ‘creative’ forces in the world. Bacopa monnieri, aka Brahmi, means the ‘energy or shakti of Brahman (i.e., Sarasvati). With Brahmi deriving its name from these roots, it has a lot to live up to. And it does! Its mind-enhancing and nervous system soothing effects are legendary.

The literal meaning of Bacopa monnieri is which expands consciousness. According to Hindu mythology, Bacopa monnieri is one of the three gods of Trinity, who controlled the world during its origin. The other names of this herb in ancient texts are Sureshta – liked by gods, Divy – divine, Saraswati, Sharad, Bharati – goddesses of learning (the herb is named after these goddesses to show that it has a good effect on intellectuality), Vayastha – arrests old age, Sharma – charming and Medhya – good for mental work.

To confirm the identity of Bacopa monnieri, Singh et al. studied the therapeutic activities of both Centella and Bacopa monnieri and concluded that Bacopa monnieri was the source of Brahmi. Bacopa monnieri showed significant psychotropic action, as evidenced by excessive sleep and conformation changes in the brain, as well as in the blood. A considerable barbiturate hypnosis potentiation effect was observed, with reductions in the acetylcholine and cholinesterase content of the brain tissue and the blood.

Mechanistic studies suggest that Bacopa monnieri have in vivo anti-inflammatory properties predicated on the downregulation of pro-inflammatory mediators (TNF-α, IL-6, and iNOS). They also possess many properties directly relevant to the central nervous system.

These include the ability of Bacopa monnieri to attenuate the cognitive decrements caused by the muscarinic antagonist scopolamine, potentially via AChE inhibition, and analgesic properties that can be blocked by the opioid receptor antagonist naloxone, suggesting interactions with the opioid system. It also attenuates the anterograde amnesia caused by diazepam and reverses epilepsy associated with GABAergic dysregulation. Both of the latter effects suggest the modulation of GABAergic function.

However, despite these indications of potential modes of action, the precise mechanism remains unknown. For instance, as yet, no direct receptor interactions have been identified, and all of the above phenomena may be downstream consequences of modulation of an unidentified system. Of course, one possibility is that they all reflect adaptogenic effects.

In this regard, Bacopa monnieri has been shown to normalize markers of HPA axis dysfunction in rat models—for instance, attenuating stress-induced changes in plasma glucose levels, adrenal gland weight, corticosterone levels, and the decrease seen in the levels of the monoamine neurotransmitters serotonin, dopamine, and noradrenaline. Whatever the mechanisms, Bacopa monnieri and its constituent triterpene saponins have been shown to exert consistent anxiolytic, antidepressant, cognition-enhancing, and anticonvulsant properties in rodent behavior models.

The first found no cognitive effects, and the second found only modest improvements restricted to the performance of one task within a cognitively demanding battery of tasks following the lower of two doses of Bacopa monnieri. However, a number of double-blind, placebo-controlled studies have assessed the cognitive and mood effects of supplementation with Bacopa monnieri for approximately three months. Two of these studies recruited healthy younger adults.

In the first of these studies, self-ratings of “state anxiety” and performance on cognitive tasks assessing the speed of early information processing, verbal learning rate, and memory consolidation were improved. In the second study, working memory performance was augmented. A number of studies have also focused on older adults (over 55 years). In this group, cognitive benefits of Bacopa supplementation have been seen in terms of attention and working memory, tasks assessing aspects of executive function and memory, word recall and executive function, and memory acquisition and retention. In one study, benefits were also seen in terms of improved mood and decreased levels of anxiety.

One study also failed to demonstrate any competent evidence of cognitive improvements. Although all of these studies were relatively small, with sample sizes ranging from 35 to 98 (average 62), the picture seems to be one of the relatively consistent improvements in aspects of cognitive function. Indeed, a recent meta-analysis that included data from six of these studies concluded that the combined results did demonstrate evidence of efficacy in terms of memory enhancement. One further study has been published since this meta-analysis. In this study, the effects of two doses (300/600 mg) of a whole ethanolic extract of Bacopa monnieri were investigated in 60 healthy adults. The measurements included an assessment of cognitive function, along with Cerebro-electrical activity parameters (EEG) and both AChE and monoamine oxidase inhibitory activity.

The results showed that working memory performance was improved following both doses of Bacopa monnieri, along with a decreased latency of evoked potentials (i.e., faster processing). Consuming the extract also led to AChE inhibition and, therefore, may have increased cholinergic function, offering one potential mechanism for the modulation of brain function.

Earlier studies had shown that Bacopa monnieri alkaloid brahmine resembled strychnine in its stimulating action but was less toxic. Deshpande and Lalta Prasad observed sedation and Nembutal hypnosis effect in Bacopa monnieri, which showed better effects than Luminal. Bacopa monnieri did not produce dizziness, nausea, or vomiting and could be used for cardiac patients.

When tried by Nair et al. on patients of tubercular meningitis, it could not prevent convulsions but reduced the severity and hastened recovery in the post-convulsive stage. To study the herb effect on memory, Dey et al. observed that the herb produced maximum improvement during maze learning by albino rats. Singh et al. observed an anti-anxiety effect in the alcoholic extract of Bacopa monnieri. Its saponins showed a significant barbiturate potentiation effect. The herb was effective in anxiety neurosis after one month of treatment.

There was significant relief in symptoms and a quantitative reduction in the level of anxiety. Bacopa monnieri had an adaptogenic effect also. Khanna and Ahmed used the herb in the treatment of epilepsy and postulated that it acted through β-adrenergic receptors. Martis et al. experimented with the aqueous and alcoholic extracts of Bacopa. It was also found to be nootropic and a memory enhancer. Dar and Channa observed a complete relaxant effect with the alcohol extract of Bacopa monnieri.

Earlier brahmine, hespestine, and a mixture of three alkaloids were isolated, but the therapeutic activity of Bacopa monnieri is due to saponins, bacosides A and B.

Bacopa monnieri has a suppressant action on appetite, and so is best combined with warming digestive herbs such as ginger or cardamom. Its astringent action is useful in diarrhea due to Vata disturbance.

Bacopa monnieri is widely used in India and China to enhance brain function and in the treatment of mental problems such as epilepsy, anxiety, and hysteria. Bacopa monnieri is reported to have sedative as well as cardiotonic effects due to the presence of hersaponin, one of four saponins isolated from the plant. It has been used traditionally to improve memory and concentration, enhance learning ability, and calm mental turbulence. It has a nourishing effect on the nervous system. It is prescribed for reducing the effects of stress and nervous exhaustion, depression, and in particular, for conditions associated with excess Vata. A trial of 76 adults suggested that Bacopa may help decrease the rate of forgetting newly acquired information.

Bacopa is a popular remedy for treating coughs and colds in children. It can also be used for asthma and hoarseness. A poultice of the entire boiled plant is applied to the chest in bronchitis and chronic cough.

A cooling diuretic, Bacopa, is used for relieving the pain of cystitis and irritable bladder.

In Sri, Lanka bacopa is used for relieving fevers.

As a medicated oil, it is neuralgic in joint pain. Used as a head rub for headaches and to clear the mind. Brahmi (Bacopa monnieri) is also used as a brain tonic to strengthen the memory and encourage hair growth. We also use Brahmi in our Hanging from Heaven hair formula.

Slow the progression of Alzheimer’s disease

Be the first to review “Bacopa (Bacopa monnieri)” Cancel reply